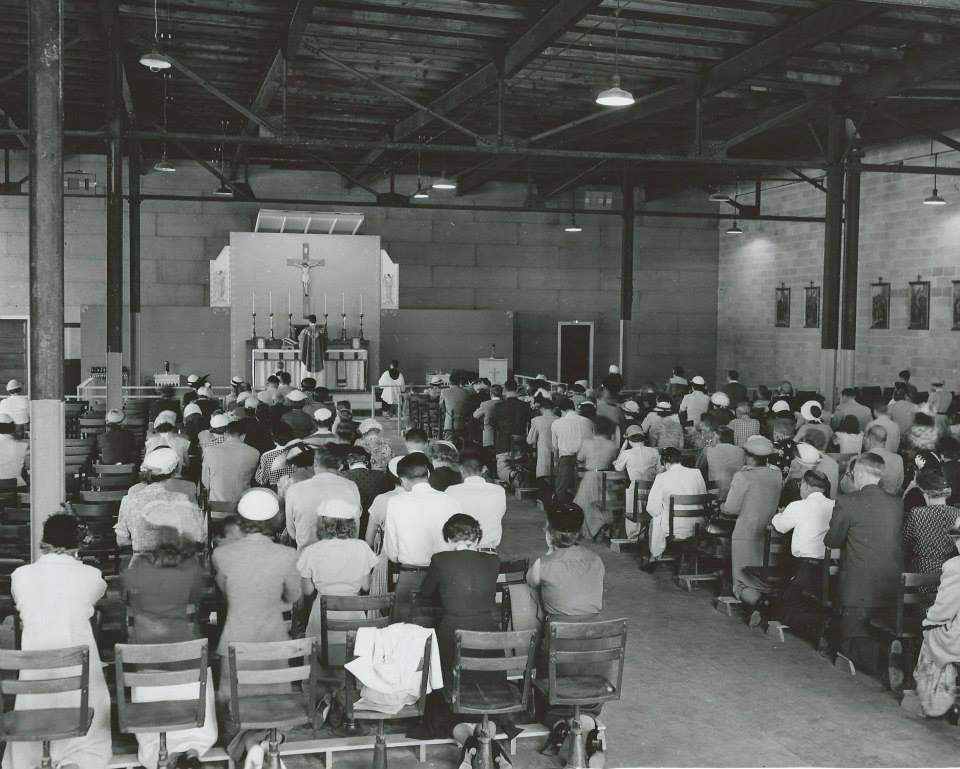 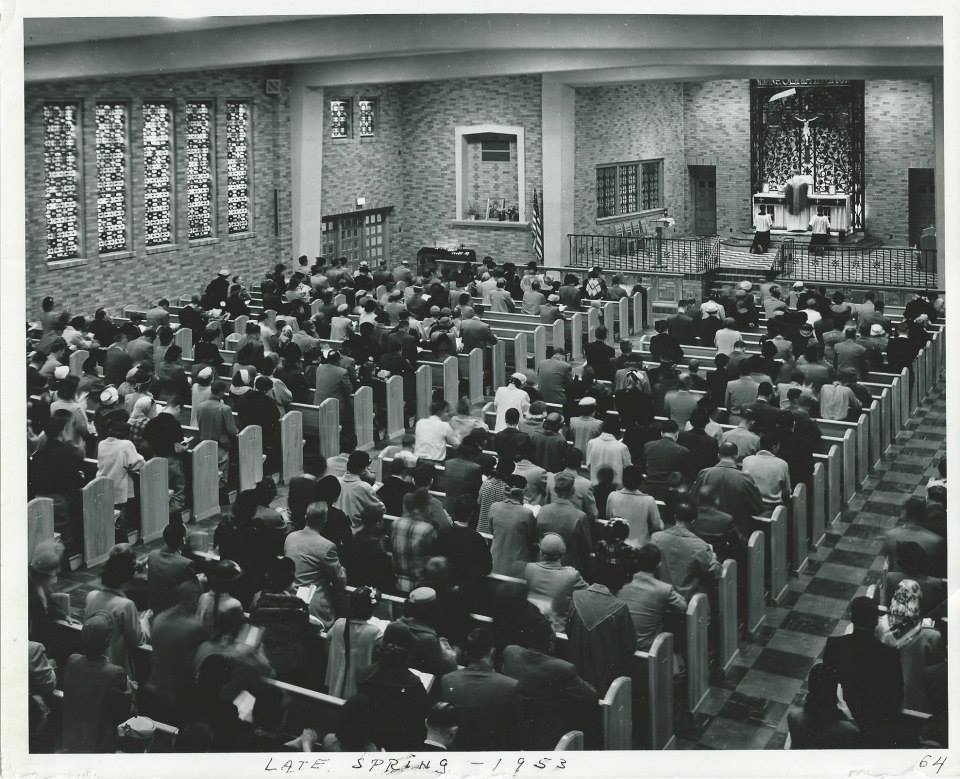 The first Mass in the new church, Easter Sunday, 1953
St. Pius X Parish Community was founded when the Archbishop of Milwaukee invited the Society of the Divine Savior to organize and operate the parish, and appointed the Rev. Paul Schuster, pastor of Mother of Good Counsel Parish, to supervise the renovation of the buildings of the former Gridley Dairy.

Fr. Leander Schneider, SDS
1952-1968: Building and Growing
Fr. Schneider was appointed the first pastor in the summer of 1952. On August 15, 1952, the first Mass was celebrated and the Masses that followed until springtime were said in the old dairy barn, in what is now the west end of the gym. The first Mass in the new church was offered on Easter Sunday, 1953.

In September 1953, the parish opened a 16-room grade school. The Salvatorian sisters agreed to teach at St. Pius X School and lived in the "White House," an existing neighborhood residence remodeled by parish men.

By February 1954, the former dairy barn had been renovated into the gym and roller rink. As well as being of great financial assistance to the parish, it provided a well-supervised place for young people to meet.

In 1955, the Sacrament of Confirmation was administered for the first time and the first grade school graduation occurred, with 46 students graduating.

By 1964, our parish family had outgrown its original space as the number of families in the parish had climbed from about 700 to well over 1,000. To accommodate this growth, an expansion was built including what is now the living room/dining room/kitchen area of the rectory, showers for the gym and the portion of the school that faces 76th Street.

Our School Board and Financial Board were instituted in 1967. The Financial Board immediately went into action taking steps to ensure our financial health, and regularly reporting on our parish's fiscal situation. Our Parish Council was started in 1968.

The cumulative effect of Vatican II and the increased involvement in church leadership by lay people led to an increasingly active role for our parish in the volatile social issues of the 1970's, such as opposition to legalized abortion and the fight for racial equality. The spirit of activism would eventually express itself in our justice and peace ministry.

In 1974 our Parish Council decided that St. Pius X would sponsor bingo. The following year, we were granted a license by the state to hold "Special Bingo Parties," on Tuesdays starting in March and continuing through June. That June, the Parish Council voted to approve an ongoing bingo program to begin in September.

Many justice and peace projects took place during these years. Among them, in 1980, our Salvatorians welcomed two Cuban refugees to live with them in the rectory until transportation, jobs and housing could be arranged. A group called W.O.W. (Wauwatosa for Open Wauwatosa) was formed in response to concerns that Wauwatosa was not open to racial integration.

In 1982, our Justice and Peace Commission presented the Wauwatosa Common Council with a petition signed by 4,632 people, calling for a referendum on a nuclear weapons freeze.

In 1983, St. Pius X joined a handful of other area parishes designating themselves as sanctuary sites for undocumented aliens from conflicts in El Salvador and Guatemala.

In 1985, St. Pius X joined a lawsuit against the U.S. Government to block the Attorney General from prosecuting Sanctuary workers and to refrain from arresting or deporting any Salvadorans and Guatemalans from the U.S. until conditions of civil war, human rights violations and persecutions had ceased in those countries.

On April 10, 1988 Mr. and Mrs. Conrad Simon, charter members of St. Pius X, had the honor of burning the parish's mortgage during an all-parish meeting.

Fr. Bill Remmel, SDS
1989-1994: Stay the Course
Fr. Luke MacArthur announced the end of his ministry as pastor at St. Pius X. Fr. Bill Remmel was appointed to take over for Fr. Luke as of January of 1994. In July, the first Director of Administrative Services was hired with the responsibility for managing many of the financial and administrative duties within the parish.
​
Fr. Keith Brennan, SDS
1994-2000: Challenges of an Urban Parish
Fr. Keith Brennan took the reins of St. Pius X in 1994 and became pastor in 1995. His tenure saw changes that affected the way parishes in urban areas do "business." The Archdiocese handed down directives that called for more collaboration between parishes. Many parishes were being forced to merge. In response, the Tri-Parish group of St. Pius X, Christ King and St. Bernard's was born and entered into a collaborative planning model.

Our parish school faced a crisis during this time. Enrollment had dropped and the Parish Council was making some hard financial choices in the face of flat contributions and rising costs. Fr. Keith appealed to the Archdiocese and was given a grant that allowed the school to continue to operate.

Some changes in our liturgies took place in 1996. St. Pius X instituted a new greeting rite where parishioners would write down celebrations on a sheet in the vestibule for announcing at the beginning of Mass. The Ministers of Hospitality program also made its debut that year.

For the first time in several years, St. Pius X had an Associate Pastor. Fr. Jeff Wocken, SDS, was part of the pastoral team from mid-1999 - mid-2000.

Fr. Robert Marsicek, SDS
2001-2013: Growth and Change
In June 2000, Fr. Keith Brennan was assigned to a position in the Salvatorian order. Our parish was led by an administrator, Fr. Michael Bigley, until our new pastor, Fr. Robert Marsicek joined us in June, 2001.

In August 2002, the parish celebrated its 50th anniversary, which was capped with an "Anniversary Weekend", which included a Sock Hop in the gym on Saturday and an Anniversary Mass on Sunday.

Father Bob's leadership helped the parish to grow. The Justice and Peace Commission remained active working with Repairers of the Breach, food pantries and issues of homelessness and racism. In 2003 we began a relationship with our sister parish, Santa Maria in Nebaj, Guatemala.

In 2011 our school merged with St. Bernard School to form our new combined parish school, Wauwatosa Catholic. The school campus is at St. Bernard's Parish, while St. Pius X became the
​tri-parish center for religious education. Our childcare program expanded to both campuses.

Fr. Paul James Portland, SDS
​2013 - Present
The Salvatorian presence and charism continues with Fr. Paul who came to St. Pius X on April 28, 2013.  Under Fr. Paul’s leadership the parish continues to flourish and is alive with parishioner participation.  Volunteer activity is up. The parish has partnered with the Wisconsin Lutheran Synod to host, in our building, Kingdom Prep High School, a high school which works to build strong, caring character in its students, in addition to giving them a solid education.

​Concern for justice issues continues to be a main focus of the parish community.  For example, the Lenten Living Waters project raises more and more money each year to build wells in remote villages in Tanzania.  Since 2012 a total of $227,600 has been raised!